Interesting Die Scratch on the Earth I believe to be a Late Die State Reverse, Wexler DDO038/DDR009. This coin was cracked out of a Brown Pack this weekend (for photos). I acquired this coin at a coin show last weekend.
Polished areas outline the shapes of the USA. They were in relief or sticking up on the working die and polished when the field was done.
Bill
Click Pictures to Enlarge! 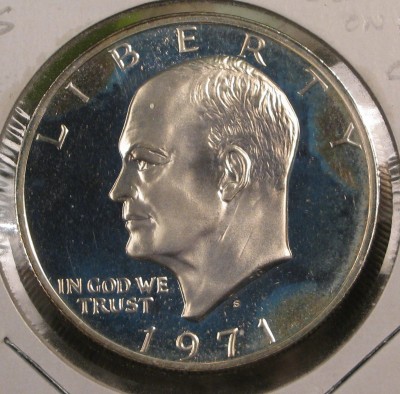 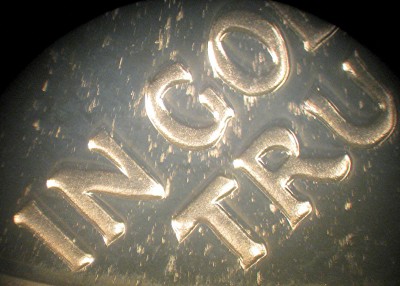 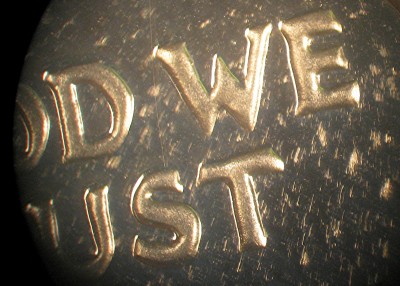 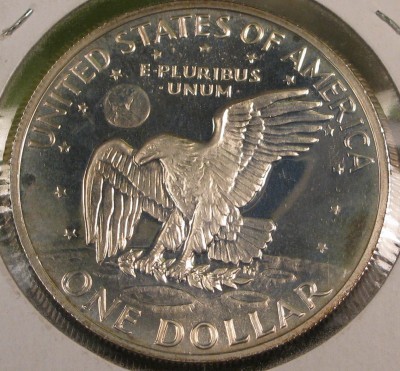 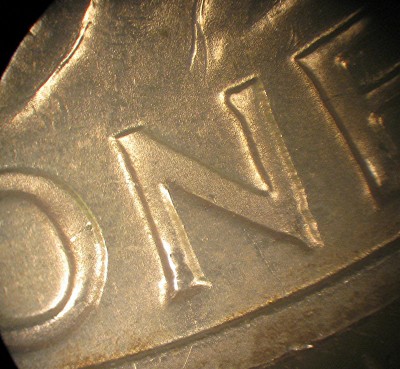 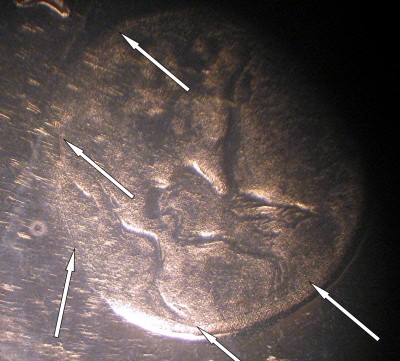 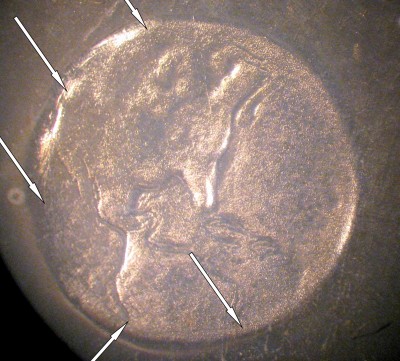 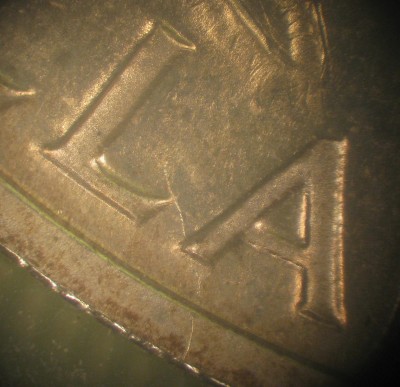 I have what I believe to be an early die state and have been looking for some more without any such luck so far. Mine of course doesn't have the die crack though, yet it's got a full earth. The DDO-038 obverse even is sharper and more distinct than the pics of Wexler's plate coin!

I can't believe this die marriage stayed together that long! Do you have the engraved lines on the upper perimeter of the moon's surface? They're on both far sides towards the rim? The one on the left is a little stronger, just below the moons' surface outline and goes over the rim.

Also, here's the kicker! Not only do the lines circle earth (orbit?), but did you notice the overlaping engraved (orbit) lines on upper part of earth? Don't they resemble something we've run across on the 72's? Sure looks like a half way attempt at the NASA insignia!

Been waiting to get a camera to post about this, but have had too many irons in the fire.

P.S. This looks to be a rare find, I've looked for another for quite a while!
I'm intrigued the most by what I know the least about... at least until I know more. - J. Owens
Top

Jim are these the areas with the ecthed lines?
Bill
(Will add pictures of the obverse above.) 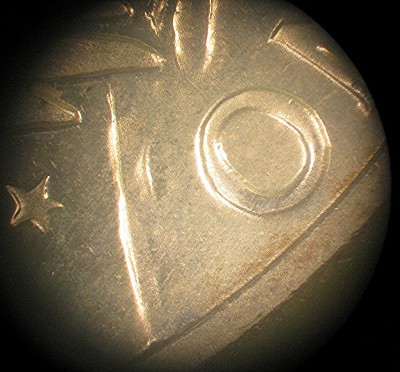 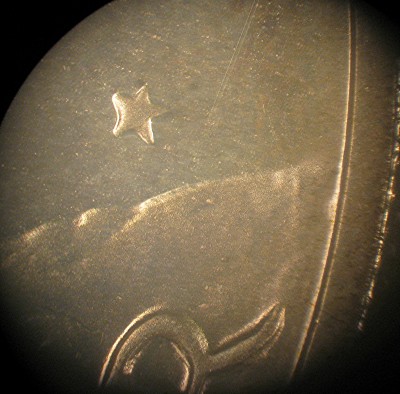 Here you go Bill, added the lines to your pic of the left side of the moon. Both pics you posted are the right areas of the lines, right side similar but longer and closer to the top of moon's surface. Although rough in, the lines are fairly close as drawn in. Notice at the 2 arrows are weak areas of the lines to where they virtually disappear. 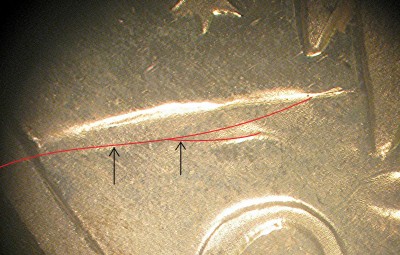 Your obverse looks nice with strong details. Doesn't appear to be that late of a die stage? Do you have die gouge marker to the right of the R in liberty? Mine does not. The tripling is hard to notice as well and very faint.

I took another look at your pics of the earth, I'm guessing you probably can't really see the NASA etching. What;s with the weird marks NW of earth's perimeter?

Jim
I'm intrigued the most by what I know the least about... at least until I know more. - J. Owens
Top

Hi Jim,
No Die gouge next to the R on mine.
Those are finishing marks which were not polished out , probably, because the details of the earth were being polished out from a refinshing job on the working die... 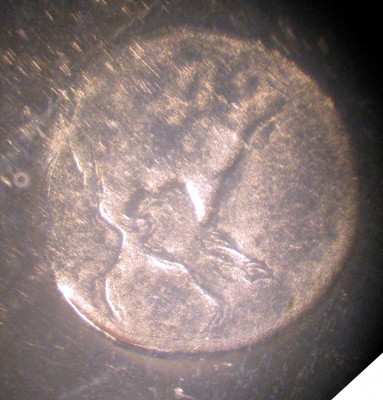 Hi Jim,
Is yours "Raw"? We would love to see pictures. Maybe we both can send ours to Rob in the future for pictures?
A pictorial comparison of Details would possibly tell us something about the affects of possible refinishing.
Thanks,
Bill
Top

Yea, Raw in the original case. Sounds good, Rob could probably do a good article/layout on them.

This baby is real cool, being dying to take some pics of it. Are you ready Rob?

Jim
I'm intrigued the most by what I know the least about... at least until I know more. - J. Owens
Top

I like the scratch around the Earth...That's probably the easiest pick-up for it?
I need something EASY to look for, if I'm ever going to venture back int the
"Proof Ike DDO-DDR Vortex"

Hi Brian,
The Die Scratch is the easy pick-up. The obverse has light tripling on IGWT. The scratch first caught my eye with a loop at the south of the earth and the NW side. I've been looking for one for about 6 months, ever since I saw a picture in Wexler's book.
A very cool coin.

Hi Jim,
The scratches to the NW (were the re-entry vechile on the Shadow Ike is located) appear as below on my coin. Best pictures I could take.
Bill
Click pictures to enlarge. 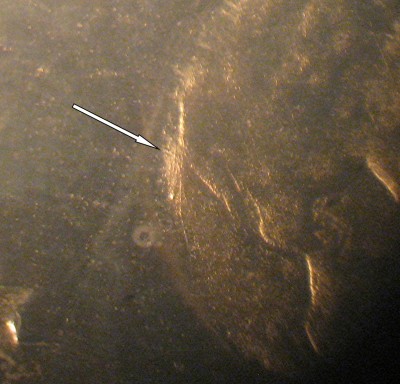 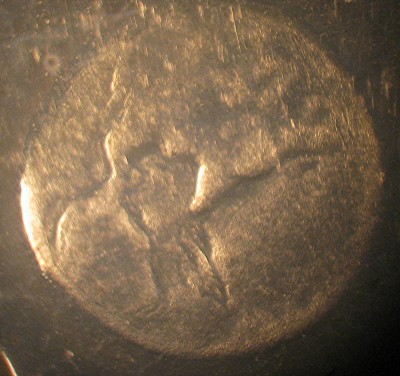