Anyway this appears to be over-abration of the area from the "E" to the rim. I originally had thoughts of calling it "Shooting Star" but when I louped it I saw that the "E" was really the focal point on this one. Thus the "Falling E" moniker. 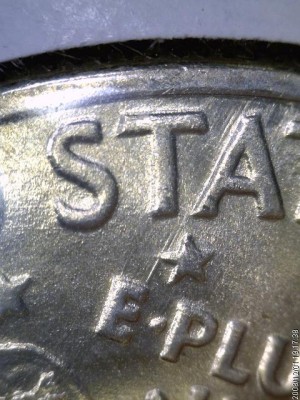 A bit of reworking from the "E" to the rim.

Heck, that E wants to join the circus! Rob
Now is the time to cherry Ikes. Lots of fruit still on the trees but don't wait too long. Rob Ezerman
Top

Digging up an old thread, but wanted to say thanks to LaMont. Happy to add the "Shooting Star" DIVA to my PCGS collection!
Back to the Hunt...
-Bryan
Top

Just got it in today. I will scope it tomorrow and see what I can find.
Back to the Hunt...
-Bryan
Top

Alright, so other markers that I have noticed.
As far as the obverse goes, I am not seeing much. The one thing that caught my eye is some light splitting in the center of the W in WE:

Very minimal spread, and although there may be some other faint signs of doubling on the obverse, nothing is eye catching.
The story of this coin in on the reverse. I didn't even try to duplicate LaMont's picture of the "Shooting Star" since he captured it well and in better light.
I did find some Die Cracks.
The first is the F in OF. Crack approaching from the south west on the left of the F. There are also two parallel die gouges to the right of the F and one further along.

I have highlighted the crack and die gouges in the following shot so they can be more apparent in the clean photo:

Then there are two parallell gouges in the O of ONE

I thought there was a faint crack in the N of UNITED, but could not capture it digitally.

This info help Steve?
Back to the Hunt...
-Bryan
Top

Very helpful. I'll take a look at what I have. I'd like to get MMP lines on it, if you can post a MMP area photo. I can't say that this would definitely make it to the DIVa catalogue, but this is the type of work that we should do, IMO, before adding it.

To date, I have characterized three obverse groups and three reverse groups of doubling patterns. This is not to say that there are not more, but I'm reasonably comfortable that there are no groupings that I have missed with doubling of significance. Of course, there may be a group X - no doubling at all, but adding that group is not currently within the scope of my work plan.
Steve Palladino
Top

SteveP wrote:Very helpful. I'll take a look at what I have. I'd like to get MMP lines on it, if you can post a MMP area photo. I can't say that this would definitely make it to the DIVa catalogue, but this is the type of work that we should do, IMO, before adding it.

Has it been de-listed? Because it is already DIVA'ed...

That is part of what drew me to this coin, I hadn't seen or heard much of it other than LaMont's thread.
I'll try to get the mmp image for you in the morning. Don't have access to my scope at the moment without leveraging more effort that I'm willing to at the moment, hahaha.
Back to the Hunt...
-Bryan
Top

Thank you for the update on the prior DIVA attribution. Certainly adds to consideration for inclusion into the new DIVa catalogue.

I would make a general statement that: We stand by our existing red DIVA stickers. However, as we move forward in providing a structured DIVa catalogue, not all "varieties" that were given DIVA stickers in the past will necessarily be added to the DIVa catalogue going forward. I certainly hold coins with red stickers that won't end up as part of the new DIVa catalogue. Even under the prior DIVA system, DIVA status was withdrawn - for example the 1971S SP partial peg leg.

The vision is to provide a structured DIVa catalogue, and then add to it as a) new DIVa Ikes are identified, and b) old DIVa Ikes are further studied and reviewed for inclusion. An additional part of the vision (which would have obviated my missing your coin's sticker) is to maintain and periodically publish a population report of certified Ikes that have received new DIVa catalogue attribution numbers and stickers.

Bringing up these coins that received some DIVA attention in the past is absolutely welcome, so please do continue, and let's keep studying them.
Steve Palladino
Top