without a lot of bending of the field, and excessive polish lines, sometimes I wonder if a purposeful design...either that, or, a very good die worker with exceptional polishing skills.

Without question or exception, not all, but a large percentage and perhaps large majority of Ike peg legs were created on the hub. Period.

I've backed it up with hard physical data. Chapter 3 in the book if you need more.

End of story, regardless of what fantasy Rob wants you to believe...

Whopper of a moon line clash on the reverse, Cal. Hmmmm..... 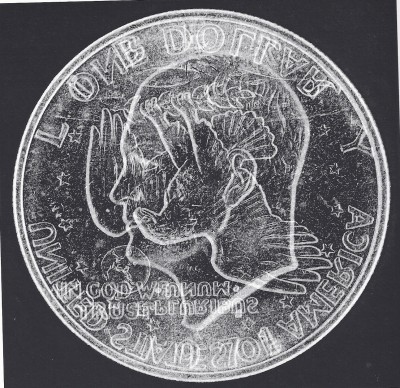 You just had to start... Like David Coverdale, Here I go again.

Anyone can scream abrasion to me until they pass out, but the measurement data and physics don't lie - it's black and white. As far as I'm concerned, that's a concrete foundation. Everything else is pure speculation until supported by hard evidence. Then we'd have a good debate (and a lot more very perplexing research).

Again, I'm saying that the hub was "de-serifed" mechanically, and after hubbing the die, the die itself would then have to be abraded to correctly finish tooling marks left on the field directly surrounding the R leg transferred during hubbing - there's no other mechanical means in the 1970's than to do just that.

So, this why we all see abrasion waves of different degrees around some peg legs, but yet still see clear cut, shadow generating relief.

76D T1 is a great example of clear cut die abrasion. The leg tapers down in relief directly into the field - it "fades" right into it and leave no shadows what so ever at the very bottom of the leg. If any of you have these, I implore you to look very closely at the true size of the abrasion wave; it's not easy to ascertain the real size without serious inspection and lighting rotation. It's MASSIVE compared to other Denver peg legs, and it would have to be for it to rise up far enough to consume the R leg that far up it's length.

Keep in mind that just because the second L and R line up does not mean they will necessarily leave clash marks; there's a number of other mechanical factors at play. I've pondered the L clash before, but you'd think by now we would have seen at least a Denver coin here or there with the clash mark readily apparent. I can only recall ever seeing one that was very faint and from the first L between the E & R. Maybe the former is out there, but I can't recall seeing one.
Authorized CAC and QA dealer
Top

AOskam wrote:Without question or exception, not all, but a large percentage and perhaps large majority of Ike peg legs were created on the hub. Period.

I've backed it up with hard physical data. Chapter 3 in the book if you need more.

End of story, regardless of what fantasy Rob wants you to believe...

There is no doubt in my mind that some business strike* peg leg Ikes were primarily the result of work done on the hub. The two FS-401 71S SB dies bear this out, with material missing from the relief portion of the leg of the R on the coins. I'm sure that there are others, as Andy suggests. Heck, even Rob's 72 / 72D class VII hypothesis requires that at least one of the hubs used in the hubbing process was a peg leg created on the hub.

There is also no doubt in my mind that some business strike peg leg Ikes were primarily the outcome of work done on the die. I can sight at least one true die abrasion 71S SB peg leg example - MMP4 (and I'm not talking about the MMP3 SPL/Redwood trunk peg leg that the Ike group has changed there thinking on

). (BTW, there are at least 7 die abrasion near-peg-leg 71S SB dies). Also, there are other years that produced peg legs that match Andy's Chapter 3 "no shadow" criteria.

I am certain that polarizing the explanation of how peg leg Ikes came to be, into an "either one or the other" is in error. I am glad to see Andy include "not all" in his statement. I want to continue to examine peg legs with a mind open to "one, the other, or combination of both".

What I can be reasonably certain of:
1) if there is any missing relief in the lower left leg area of the R that is above the level of the field, there is (unless dealing with a filled die) strong suggestion of work done on the hub
2) if there is "field bending", there was work done on the die
3) If there is a peg leg with heavy field bending and a "no shadow" peg leg, die abrasion is at least partially, if not entirely responsible for the peg leg.
4) If there is a Class VII peg leg on serif hubbing, it is theoretically possible to raise the field to eliminate the serifs, yet retain the "shadow" effect of the peg leg portion.
5) It is possible that in a given year/MM production run, that both, primary hub peg legs and primary die abrasion peg legs, could exist. (71S SB is a case in point)

*my post above is specific to business strike peg legs, and not necessarily applicable to proof peg legs.
Steve Palladino
Top

AOskam wrote:You just had to start... Like David Coverdale, here I go again.

Just stirring the shit, Andy. I get what you say and believe it to be true - for some (maybe even the majority, as you suggest), but not all peg legs. Note, my last post was generated before reading your latest post and posted after it.

I hope, as I catalogue peg leg MMPs, I can take a closer look at this question on a die by die basis. 71S SB is effectively done. I have the 71D MMPs photographed, and ready to document, but damn, my free time has been slim lately.

BTW, in cataloguing these business strike peg legs, I'm being careful to separate the true peg legs (by your definition) versus the near-peg legs.

Regardless, it would be interesting to have seen what happened with a L to R clash and how the mint guys dealt with them.
Steve Palladino
Top

Oh, I know - but I can't let this one alone with Rob on the loose! Although, there is a surprising rumor recently that he may have turned to the dark side and jumped on my wagon!

I guess I should also qualify that when I talk peg legs as a generality, I'm not considering any of the purposely designed peg legs in my comments, meaning the early proofs, 1972 SB, 76T1, etc. - I'm mostly talking just Denver business strikes. 71 SB pegs are almost their own animal.