I figured it out, the top pic is of the PR69DCAM and the bottom pic is the PR68DCAM. I could tell by the small mark above the 7 in the bottom photo and matched it to the PR68 (mark is partially obscured by the triangulation lines).

So if I am counting correctly, that makes 4 MMP1 Micro-S and 2 MMP2 Micro-S, correct?
Back to the Hunt...
-Bryan
Top

1872Hokie wrote:So if I am counting correctly, that makes 4 MMP1 Micro-S and 2 MMP2 Micro-S, correct?

I can't be certain that Lee's and Jay's are definitely MMP1, or if one of them might even be a 3rd MMP. Out on a limb, I'd say their both MMP1.
Steve Palladino
Top

Cool, I'm still searching for more candidates, so I will keep you posted on what I find.
Back to the Hunt...
-Bryan
Top

1872Hokie wrote:I figured it out, the top pic is of the PR69DCAM and the bottom pic is the PR68DCAM. I could tell by the small mark above the 7 in the bottom photo and matched it to the PR68 (mark is partially obscured by the triangulation lines).

Hey Steve,
I will work on that when I get back from vacation next week. The 74S was found in a lot of 100 silver IKEs that a dealer had. The dealer had cherried all the Doubled dies, but I found this one micro S out of all the other 74S's that he had. Thanks again for your comments.

Thanks Joe,
The more examples of the Micro S we can identify the better.
Back to the Hunt...
-Bryan
Top

SteveP wrote:I just finished adding Tom's MMP lines to three additional 74S micro-s SPs (two of which are the two coins that Bryan mentions above). I can confirm unequivocally that there were at least* 4 different MMS-1 dies used, and of these 4, two were responsible for micro-s coins (74S SP micro-s MMP1 and MMP2 photos below). (*given this sampling of only 9 SP coins with MMS-1, there could be more MMS-1 dies, and for that matter, micro-s dies).

Preliminary revision:
I now have Bryan's PR69 and PR68 Micro-S coins in hand to compare to the PR69 Micro-S coin that I already have.
My Micro-S has a third unique MMP. Very similar to Bryan's PR69 (MMP1 in previous posts), but subtlely different in MMP and with other markers that differentiate it from Bryan's.
That makes at least 5 different MMS-1 dies, of which, 3 produced Micro-S coins.

Lee's photo was too pixilated to tell, but may also be a MMP1.

All of the three different Micro-s coins that I have in hand to study are DDO (MD). I'll be studying for other markers for the remainder of this week. Awaiting Brian's PR68 Micro-S to study in hand. 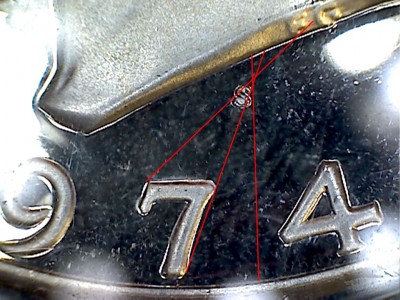 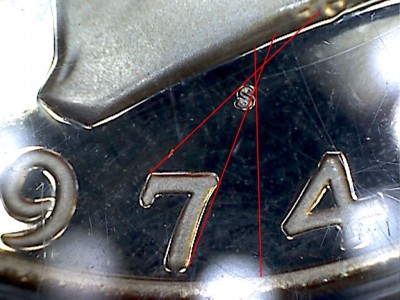 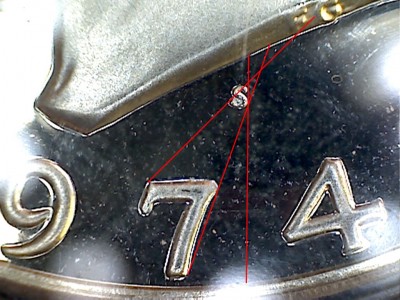 And the plot thickens...
So we now have 3 different MMP's for the Micro-S, and in all likelihood we have potentially increased the minted population by another 2,000?
Back to the Hunt...
-Bryan
Top

1872Hokie wrote:And the plot thickens...
So we now have 3 different MMP's for the Micro-S, and in all likelihood we have potentially increased the minted population by another 2,000?

I figure at least 10,000 MMS-1 SP Ikes were produced from at least* 5 dies. It is my contention that the Micro-S was a product, in part, of die polishing, and therefore, would be produced only near the latter part of a MMS-1 die production cycle. If true, hypothetically, the population of 74S SP Micro-S Ikes is likely very fractional of 6,000.

I'm hoping to study this "fractional" aspect in the same-MMP coins that I have in hand. As I partially postulated in a prior post, the population of Micro-S coins is dependent on a) "batch size" (# in each production run after each re-polishing), b) how aggressive the polishing was applied (how much field emerged in the upper loop of the S with each polishing), c) the # of batches produced after the initial emergence of what would qualify as a Micro-S on a given die, and d) whether the emergence of a Micro-S had anything to do with discontinuation of using a die.

If the batch size was small, and the # of batches produced after the initial emergence was small, then the 74S SP Micro-S remains a scarce coin, even with three known dies.

* again, the caveat is that there may be 74S SP coins from still other MMS-1 dies out there - the study sample is still small. There were just over 1.3 million 74S SP coins produced.
Steve Palladino
Top

It is hard to extrapolate these latter data to 1974, but they do that micro-s is a fractional outcome (44% in this sampling) of the total MMS-1 die production.

There are 5 known MMS-1 1974S SP dies. Three of those die are known to have produced Micro-S coins.

I'll go out on a limb (with more study and further discovery yet to occur), and guess that there were <4500 Micro-S coins produced. 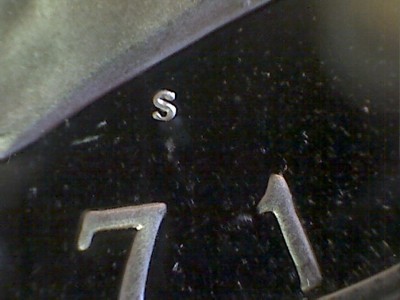 71S SP micro-s with field within upper and lower loops