SteveP wrote:Preliminary revision:
I now have Bryan's PR69 and PR68 Micro-S coins in hand to compare to the PR69 Micro-S coin that I already have.
My Micro-S has a third unique MMP. Very similar to Bryan's PR69 (MMP1 in previous posts), but subtlely different in MMP and with other markers that differentiate it from Bryan's.
That makes at least 5 different MMS-1 dies, of which, 3 produced Micro-S coins.

Lee's photo was too pixilated to tell, but may also be a MMP1.

All of the three different Micro-s coins that I have in hand to study are DDO (MD). I'll be studying for other markers for the remainder of this week. Awaiting Brian's PR68 Micro-S to study in hand.

Randy just found another Micro-S. I can confirm it by photos as a Micro-S with MMP1.

Steve, please let me know if this is a better/closer pic. If you need even closer I can get it for you. Sorry for the delay. Work has been hectic since my return from vacation. 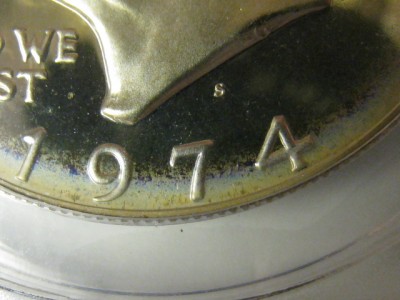 jaceravone wrote:Steve, please let me know if this is a better/closer pic. If you need even closer I can get it for you. Sorry for the delay. Work has been hectic since my return from vacation.

It remains at least 5 different MMS-1 dies, of which, 3 produced Micro-S coins. One more MMP1. 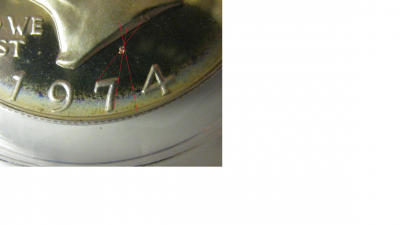 I have not seen a 73S (haven't really looked

), but their existence does not surprise me too much. (who knows, however, they may be more rare than the 74S micro-s

Here is a post of mine from earlier in the thread:

In the Type 1 (peg leg), there quite a few micro-S examples. In general:
- the amount of field in the open loops of the S seemed to correlate with the spread between the W&E
- there were a couple of MMs that were an exception to this correlation, with robust MMs, despite notable gapping between the W&E
- the greater amount of field and loss of device was notable on the lower loop of the S (as opposed to the upper loop of the S in the 1974S micro-s)
- I did not apply MMP lines to group the coins by die

In the Type 2 (funny foot), there was only one of perhaps 8 MMs that had some field showing within the loops of the S, and it was the upper loop.

Some out on a limb hypotheses:
- repeated die treatments likely contributed to some of the development and progression of the micro-s
- it is likely that the MM punch process (depth and balance of strike of the MM punch) had a strong contributing role as well: on some 1971S Type 1 proof dies, the MM was apparently punched lighter than on other 1971S Type 1 proof dies, and in addition, skewed to deeper on the north side of the S and weaker on the south side
- with the fading peg leg R and consequent funny foot fix, it is also possible that instructions were given to strike a more robust MM on the Type 2 1971S proof dies

Implications to the 1974S micro-s:
- on 1974S proof dies, it is plausible that the same thing happened as with some 1971S Type 1 proof dies - the MM was apparently punched lighter than on other 1974S proof dies, and in addition, skewed to deeper on the south side of the S and weaker on the north side (I favor this hypothesis over a wrong denomination S MM punch)
- repeated die treatments likely also contributed to some of the development and progression of the micro-s

Again, I use the disclaimer that the numbers are not overwhelming, and the observations are more qualitative than quantitative.

Oh, by the way, besides finding the two latest additions to the nightcrawler population 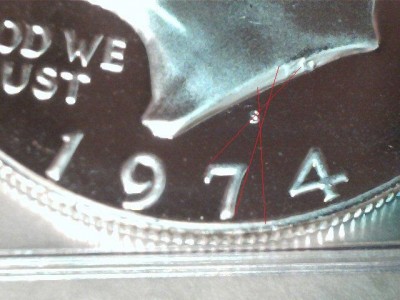 The CP 74's are a little easier to find, although I only have 9, with, it seems like 3 different mmp's ( haven't put much effort into the mmp yet ). Maybe one of them will prove to be tough. But a FULL set of micro's would be a challenge , assuming you collected all the ' Micro ' MMP's for each of the 4 years ..........

Pretty clear in the pictures, 2 different. 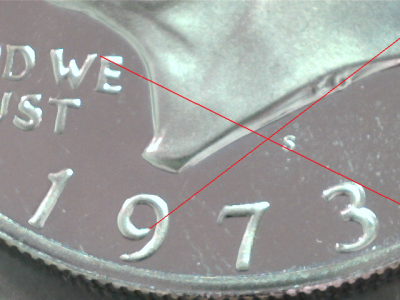 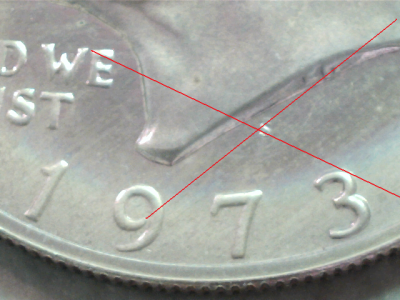