I'm new to variety hunting so I don't know what this variety is called or what it would be worth.
But as you can see on one of my 1978 ikes the print is smaller than the other. Is this normal?
whats something like this worth? thanks 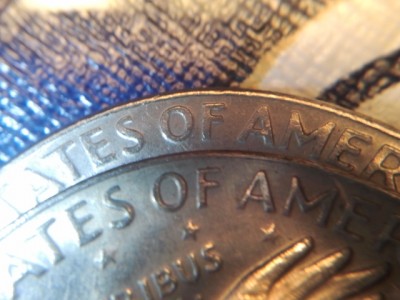 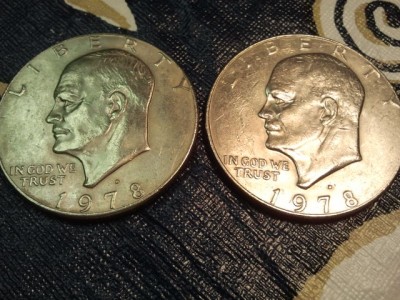 I suspect the die has been polished and abradied enough to cause the difference.
Top

so what does that mean? Is it rarer than other ones or any premium?
Top

Being in the East, I have not seen that many D mint dollars in circulation. I will let somebody else chime in on rarity, value etc.

I know that I have seen enough D mint similiar style quarters that I do not consider those rare. I was more apt to see that effect on D mint coins rather than Philly.
Top

I was given to understand when the letters were flat like that and not fully rounded
It was due to that particular coin not being fully stuck with sufficient pressure
from the coin press.
Please correct me if I am wrong.
Top

Absolutely - you have one coin that is not fully struck up, which is beyond common for Ikes, and, you have one that's well struck. Herb is correct though, and one could very well be abraded further than the other (a later die state). Take a look at most 71D's; non-fully stuck is the norm, not the exception.

Keep in mind, it's only a mere few thousandths of an inch we're talking about here. To the human eye however, it can look like a mile depending how it's visually presented.

The edge of a coin is basically the last place for metal to "flow" during the striking process. If dies are worn, surface tension will prevent full strike up, or, that batch of planchets was just a little harder (not as plastic), or, the tonnage wasn't true to the reading on the machine and the coins were't getting what the gauge said they were getting from the press (I wouldn't put it past the mint to be manufacturing without calibrated equipment in the 1970's, and would in fact bet on it) - or, a combination of several.

All lettering "should" have a domed or rounded effect - like most silver Ikes. Most clad business strikes have at least some letters that have flat tops somewhere. Why? Proofs: made for collectors. Clad business strikes: made to mass produce as fast as possible.

I suggest you read the metallurgy chapter in the book (might also be an article on the main site too?). It deals with the Type 2 story to some degree, but much can be applied to any Ike.

Value of your Ikes: $1 each.
Authorized CAC and QA dealer
Top

AOskam thank you sooooo much thats the exact answer i was looking for.
Top
Post Reply
7 posts • Page 1 of 1