In our research for the book, we would occasionally run across Frank Gasparro being associated with "tinkering" of the dies, which he would occasionally get caught doing and scolded for doing so. Obviously, Frank had a lot of pride in his work and went to great lengths to throw in some awfully intricate and minute details (Just look at the REV (re-entry vehicle) on the FEV as a perfect example).

Well, how about Frank putting a golfer on the Moon "smuggled in" and hidden right next to his FG initials under the tail of the Eagle?
There is clearly something "unnatural" there. Something can clearly be seen on the 71-S and 72-S Silver proofs. I think the 72-S Blue pack Ikes actually offer the clearest example of the image.

Unfortunately, it kind of "mushes" together rather quickly, so clear examples are hard to come by. One needs a fairly early Early Die State to see the outlines. I believe Frank has a golfer there for the first two years, after the FEV, because there is nothing there for the FEV....maybe he was too busy with the REV?) and then changes it to a golf tee flag from 1973 on. I believe this is his "personal touch" and sense of humor showing through in his design.....Heck, an astronaut "smuggled" a gold club and ball up to the moon past NASA officials, why couldn't frank "smuggle" a golfer onto the moon past the Mint officials?

Here are a couple of shots of the FEV (no-golfer and first struck) clad Ike design....and a 72-Type 3 VEDS with what I looks to be a golfer hitting a golf ball next to FG's initials. To me, the "Clad Ike Golfer" looks a little different than the "Silver Ike Golfers". One can't see the legs and boots as well as on the Silvers, and his head is down more. However there is also a club and yes...even a ball!

Just throwing some mud on the wall.......Many might think I'm hallucinating or had a few too many,....So, I ask: Has any one else out there seen a golfer next to FG? If so, and you run into a VEDS with some recognizable features, could you post them to this thread?
THANKS! 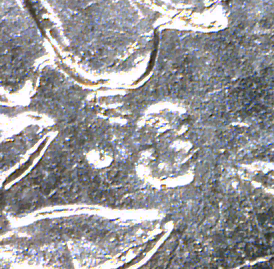 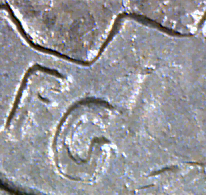 Brian,
You mean this little guy ? Looks like he is having fun

This little guy is on the reverse of the coin I posted earlier. Name of thread "Interesting 1971 S Proof"
No Hallucinations on this one

Always thought this was really cool piece of mischief on the part of Mr. Gasparro 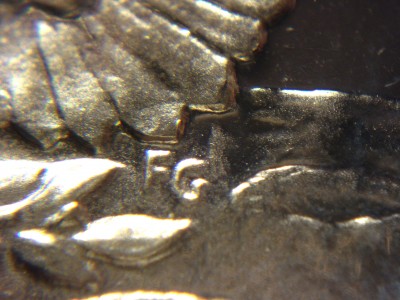 Although,....I think he has a different guy on the clads, than he does on the proofs. The proofs are much easiesr to see the legs and feet. On the clads, the golfer seems to be in the middle of his backswing. on the proofs the club is more down.
I bet Frank had a BIG chuckle pulling that one over!....much more fun to "slip in" a golfer than the tiny REV.

the golfer seems to be in the middle of his backswing

Brian
Here are a couple of Shots of the Golfer on the reverse of a 1972 D
Not the greatest shots. But the little guy can just be made out.
On this one he looks to have his head down and club down
like he may be lining up a shot or a putt. I wonder if there may be different positions on different years.
Just Mud on the Wall

This is fun. Thanks Brian 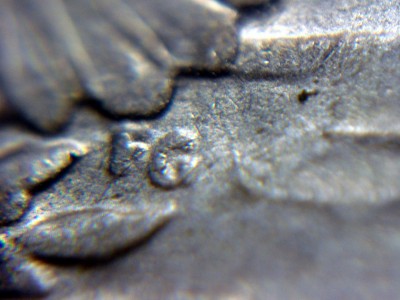 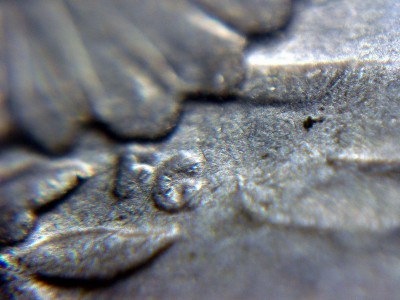 And who shot JFK again? LOL.....
Ever Dance with the Devil by the Pale Moon Light?
Top

Brian,
Here are a couple of shots of the area around the designers initials of a 1971-D FEV, Interesting Huh?
I had this 1971-D FEV Struck on a proof planchet set aside for study on something else that I have been working on. And your comment about the fact that they are harder to see on the circulation strikes and easier to see on proofs made me wonder if it might be a little clearer checking a circulation strike on a proof planchet. What is your opinion? Let me know if you see what I am seeing. Or if we area just looking at the Grassy Knoll

Just a little side note: When the wife began buying compact florescent bulbs. I put one in my desk lamp and found that for shooting coins they are terrible for getting the pictures to come out the way the coin looks in hand. But for bringing out small details they do quite a good job. I now have two different types of light bulbs on the desk. 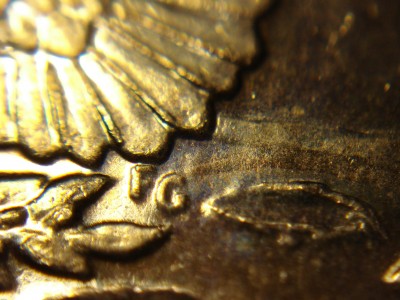 Hey Stew,
Vey interesting!!.....I didn't think the golfer was on the FEV, but it sure looks like one is on yours!

Any one else find a "golfer" on an FEV? Now I have to go a re-check mine!

After seeing this posting on here I became highly interested to see if I could find one as well. I am not sure how common it is to see this on a Denver minted circulation coin, but I did find this one on a 1971 D Ike that resides in a PCGS holder. I thought that this photo showed the little guy pretty well. 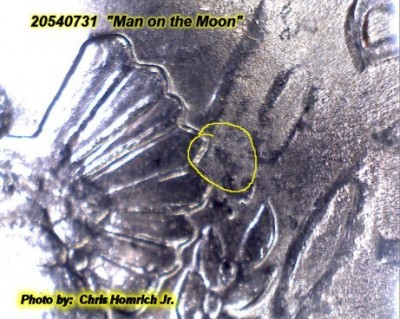 "Do what you can with what you have, where you are" Theordore Roosevelt
Top

Nice Picture Chris,
Welcome to the
"Brian Vaile made me empty my safe again to look for a new variety club"

He is a variety magnet.
It takes some patience to get the coin at just the right angle to get that little golfer
guy that is raised off the coin (In Relief) to come out in the pictures.

Brian,
I am happy to help by sending you back to the safe to go over some coins again.
Just returning the favor that you have done for me so many times.

Definitely some of my favorite Eisenhower Dollar moments, the excitement
of looking for a new variety in my own collection is an absolute blast
Top

lol Stew, I like the name of that club. With the possiblity of all the new varieties of Ikes that could be found, no matter how I look at it, I cant bring myself to sell any of the Ikes I have currently. I know if I did, some super rare variety will be found and I will be kicking myself for not holding on to them just so I can look through them all over again. I'm really hopeing that someday someone will discover a new variety on the bicentennial Ikes. Not only do I have tons of them in the safe, but I have rolls of them that my family bought from the local banks the week I was born since I was born on July 4th 1976 lol . If there were to be a new variety, that would give me the nudge needed to open those old rolls lol.
"Do what you can with what you have, where you are" Theordore Roosevelt
Top
Post Reply
42 posts