I thought we had a seperate thread on this previously, but apparently not. So, I'm starting one.

I sent one in the other week for restoration service at PCGS and they did a real nice job on it, as it was really fouled up with I don't know what on the surface. It's not the most spectacular grade, but, it turned out far better than what it looked like when I submitted it. 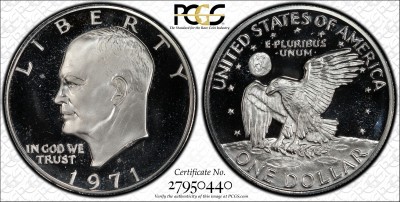 That's one TOUGH puppy to find!

Looks like you've been having some.....
Happy Hunting!
Brian
Top

That's one TOUGH puppy to find!

Looks like you've been having some.....
Happy Hunting!
Brian

I agree. These are tough!

The one I sent in got a 66DCAM as well.
I cannot and will not be held responsible for my typing errors as it appears that there is a bug in the keyboard!
........I've tried on numberous occasions to fix the problme but it just keeps coming back agin and again! -L. Lydston 2008
Top

Great coin, like Brian and Lee said, a tough one to find.
Is this one that people still aren't looking for, or do we think that it is that rare that there really aren't that many of them left to find? Are there any population numbers of known examples?
Thanks for sharing!
Back to the Hunt...
-Bryan
Top

For the past few years, I have been and continue to be on the look-out for the nightcrawler. I have been unsuccessful. They are that rare. With Lee's additional specimen, there are now 7 known examples.
I'll always keep searching. (The nightcrawler, BTW, has a serif-R obverse)
Steve Palladino
Top

Steve, I've had this one for 2 or 3 years - just in case that influences your count.
Authorized CAC and QA dealer
Top

My bad, I needed only to look at the original post and see that we are discussing Andy's coin.

I'm was going off Brian's count and figured that there was one more to add. If brian had been counting this specimen, I guess we're still at 6 known examples.
Here is the nightcrawler census thread:
http://forum2.ikegroup.info/viewtopic.p ... wler#p6487
Steve Palladino
Top

Feeling lucky to have one of the 6!
Back to the Hunt...
-Bryan
Top

If someone wants to move my post here, please feel free.
http://forum2.ikegroup.info/viewtopic.php?f=38&t=1928
Top

I have reliable information that the nightcrawler census is up by two to 8 known pieces. The two were found in one purchased lot!!! These are not the pending ones from ILIKEIKES.
Steve Palladino
Top
Post Reply
237 posts