Hi! I’m new to the forum. I have been coin collecting pretty heavily for a few years, but only recently started collecting Ikes. While I was comparing some 1776-1976 D’s I came across an odd one. I have a raw 1776-1976 D Type 1 in what appears to be a low mint state (maybe MS-60 or 61). The obverse is normal, but the reverse is really weakly struck. All features are weak. Most interestingly, however, the P from E Pluribus Unum is essentially absent. On close inspection a faint outline of the P can be seen, but just looking at the coin it looks like it is missing. Is this a known/common variety? I don’t have the Ike “Big Book” yet, so perhaps it is well known. Given my background in other coins, though, it seems interesting. Can anyone shed some light on this? Thanks! 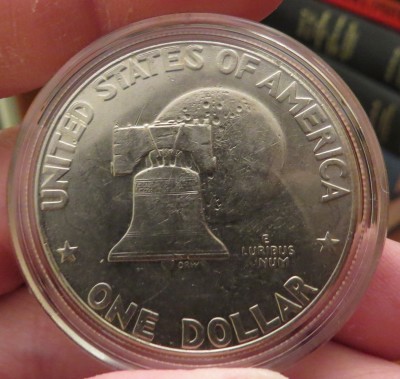 Looks like a type 1 to me. Nothing out of the ordinary that I can see, but I just took a quick look.
As far as the P in the motto goes, I'd guess that it's grease filled. This could also account for the faint strike of other facets on the coin's reverse.
Hope this helps.
Back to the Hunt...
-Bryan
Top

Sorta like the In GOD WE RUST Kansas State Quarters.

Not muc, if any premium, except possibly to a collector of this type of thing.

I like struck through grease coins, but with more extensive loss of devices.
Steve Palladino
Top

Yeah, nothing to get excited about on this one, really not all that uncommon. Once you get one where the entire bell and moon are un-struck due to grease, then it's a little more interesting.

Don't take my word, however. I'm not an error fan - they're all just quality control defects to me.
Authorized CAC and QA dealer
Top

Thanks! This makes perfect sense. I should have thought of it. Thanks for your help and the quick responses!
Top

Ever been to the Keys? They have a great Hemingway contest every year. (I'm a Florida Ike Guy)!

A little struck thru grease can always get interesting....Flip that baby over and check out the obverse.

Is it an OAK (Off at The Knees) No FG obverse?
Or does it have an RPM (Re-Punched Mintmark)?

Then, the more common Struck Thru Grease gets a little more interesting when it just happens to fall onto a cool DIVA!

Hi! Thanks for the welcome! This seems like a great group. I didn't realize how interesting Ikes are until recently.

Yeah, I'm in Connecticut now, but I'm actually a Biologist and did a lot of my research out of Key Largo. I love the Keys - hence the FL handle.

I'll have to check the obverse more closely when I get home tonight...
Top
Post Reply
7 posts • Page 1 of 1